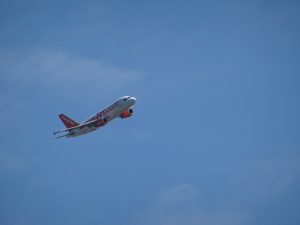 This detailed SWOT analysis of easyJet aims to analyse the strengths and the weaknesses of easyJet. It also aims to explore the opportunities the airline should explore and the threats it should keep an eye on. easyJet is a British airline, headquartered in London Luton Airport.

easyJet is a low-cost European point-to-point airline. It is based in London Luton Airport which is one of the busiest airports in the UK. It operates from 27 bases across the UK and Europe. It flies to more than 32 countries and serves over 1000 routes (easyJet, 2019). It also carried a record 96.1 million passengers in the year ending 30 September 2019 (BBC, 2019).

easyJet employs over 12,000 people. It has more than 2,865 pilots and 6,516 cabin crew members. Customer loyalty is another great strength of easyJet. In 2016, 74% of the airline’s seats were booked by returning customers (easyJet, 2019). The airline has seen an increase in customer loyalty in its core markets. Also, its recent vow to become the world’s first major airline to operate net-zero carbon flights has been received by stakeholders with much enthusiasm.

Like many other budget airlines, easyJet’s earnings often rely on the summer season. This reliance may make the airline vulnerable to any uncertainty and challenges which may occur during the season. easyJet also reported a 26% drop in profits for the year ending 30 September 2019 (BBC, 2019).

In an AirHelp’s survey in 2015, easyJet was named as one of the worst UK airlines for dealing with flight compensation claims. It is worth noting that AirHelp is a company that provides legal help for customers making claims for delayed flights (Morris, 2015).

easyJet can grow further by exploring new routes in Europe. New airports and runways in the UK and Europe will also offer the airline further opportunities for growth.  The airline has mostly young travellers going away for summer/winter holidays and weekend party trips. This often alienates older travellers. Therefore, focusing on other demographics is certainly worth the effort.

Recent collapse of Thomas Cook offers easyJet a great opportunity. It can now pursue and benefit from the gap let by Thomas Cook in the package holiday market. In fact, its decision to relaunch beach holidays and city breaks is a move in the right direction.

The last element to address in the SWOT analysis of easyJet is the threat/s. The airline has a number of direct competitors in the European low-cost airline industry. Some of its main European rivals are Ryanair, IAG, Flybe, Norwegian Air Shuttle, Pegasus Airlines, Vueling Airlines and Wizz Air.

Like most other airlines, easyJet is also faced with Brexit challenges which may affect the operations of the airline both in the UK and the EU. It is not yet clear what Brexit would exactly mean for easyJet and other airlines. Likewise, any political instability in Europe will also have challenging implications for the airline.

PESTEL analysis of the Netherlands