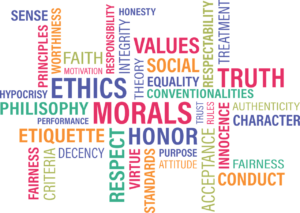 What is business ethics?

Ethics is a system of moral principles that govern the conduct of a person. According to Hill (2012), business ethics are the accepted principles of right or wrong that govern the conduct of business people. High standards of quality, transparency, and integrity are vital to the success of any profession. Therefore, organisations need to have a set of principles that guide them on how to behave as business entities. For example, American Marketing Association (AMA) has its own code of ethics that aims to help marketers guide their own behaviour and professional conduct.

Although business ethics is an important issue for any business, some organisations do not seem to be much concerned about it.  For instance, how about child labour? Is it ethical to use child labour? The answer is ‘No’. However, many big organisations have been accused of using child labour in developing countries. Likewise, how about bribery? It is certainly unethical. Yet, some big organisations have been allegedly engaged in the work of handing over cash, kickbacks or other considerations to gain certain favours which are undoubtedly unethical if not illegal.

There are some common ethical issues that organisations face in both home and abroad. According to Hill (2012), these issues are employment practices, human rights, environmental regulations, corruption, and the moral obligation of multinational companies.

Violations of human rights and environmental regulations by some companies have led to violent protests over the years in many countries in the world. Human rights violations are very common in some countries; however, many big organisations seem to have no problem with it. Consequently, a question arises whether companies should operate in countries with poor human rights record.

Employment practices in some countries are questionable as well. A full-time worker works 35 or slightly more a week in the UK. Employees have legal rights to protect themselves from unscrupulous employers. However, this is absent in many countries. For example, NIKE terminated a long-term contract in the early 1990s with one of its suppliers (The Tans) which was allegedly forcing twelve hundred Chinese and Filipino women to work 74 hours per week in guarded compounds on the Mariana Islands (Hill, 2012).

Authoritarian and repressive regimes exist in many countries. So, is it ethical for multinational corporations to do business with those countries? The answer is not very straight forward; however, companies such as General Motors, Kodak, IBM, Xerox and many more set a good example by divesting their South African operations during the days of apartheid.

Environmental regulations are very stringent in many developed nations; however, developing nations often lack those regulations. So, here comes once again the question of doing business in those countries. This is a dilemma for international organisations since what is considered a normal practice in one country may be considered unethical in some others.

Finally, it can be said that multinational organisations must not engage in certain things which are clearly unethical.  Paying workers $2 a day, forcing workers to work more than 100 hours a week, and unsafe working conditions are some of the examples where there is no ethical dilemma. These issues are very clear. Therefore, organisations must stay away from them.