A Brief Introduction to Fruit and Vegetable Carving 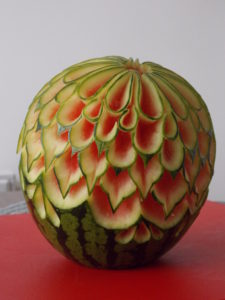 The origins of fruit and vegetable carving have long been disputed between China, Japan and Thailand. All have laid claim to this exquisite art and each have their own extensive history regarding it.

During the Tang Dynasty, between the C6th and C9th in China it was believed that the Emperor Zhongzong commanded his chefs to celebrate his return to the throne with creating food of exceptional brilliance, and they produced, among other things, mythical creatures with fruit and vegetables.

The Chinese claim that as China expanded, the art of fruit carving spread to the colonised countries and each country incorporated their own culture and faith into the representations in their art.

In Japan the art is called Mukimono. Some Japanese claim that mukimono was prevalent in culinary culture for at least a couple of thousands of years before, allegedly, it gained importance during the Edo Period from C16th. Aesthetics gained prominence in Japanese culture and so mukimono became more refined, even though it was used as a more practical application of the art as it was garnishing rather than an offering or a display and it was eaten.

In Thailand fruit and vegetable carving is so ingrained into their culture that it is taught from primary level education all the way through to university.

In the capital Sukothai from about the mid 14th century fruit carving was used during the major Thai festival of Loi Krathong. It is said that in 1364 during the reign of King Phra Ruang, the Lady Nang Noppomart wanted her raft to stand out amonst the others in the festival. So she used a flower as a template and carved a vegetable. She then carved a bird to sit amongst the flowers. Her skill impressed King Phra Ruang so much that he decreed that all women should learn the art.

Over the years interest for fruit carving in Thailand, depreciated. It was revived by King Rama II who loved the art so much that he wrote a poem about fruit carving.

The poem told the story of a banished Queen who returned into the palace disguised as a maid. She carved pictorial messages into pieces of marrow for the Princes marrow soup. Her Son recognised the messages and eventually re-instated his Mother as Queen. The art of fruit carving was continued.

Today, despite the absolute certainty of the origins of fruit and vegetable carving, the art thrives all over the world in one form or another. The West incorporated this into luxury cuisine and offered it up in restaurants and hotels. Nowadays it is also a part of elaborate wedding displays.

Though there are specific tools designed for fruit and vegetable carving, people have adapted to the limited availability of these and tend to use a variety of knives. Traditional carving knives are long and extremely thin with elaborately detailed handles. Melon ballers are also used and some people even use a variety of carving tools.

S. Young is a freelance fruit carving artist and trainer. With extensive experience in the world of bespoke culinary art, S. Young now writes online regularly, sharing invaluable knowledge. She holds a Diploma in Business Psychology and a Certificate in Fine Arts.